My new novel, Chop Stix, opens in late November 1963 with FBI Special Agent Tom Warren, a week into his new assignment, at the San Francisco Bureau to lead the effort to break down a well-organized Chinese spy network. 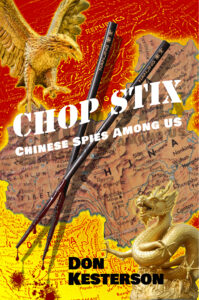 Soon after his arrival, he is discreetly given a picture of a murdered Japanese woman with a chopstick jammed into her mouth. Tom recognizes this as the handiwork of his old nemesis, Dr. Wang–the leader of the same Chinese spy network. His last run-in with Dr. Wang resulted in the death of Tom’s entire team, and he is determined to have different results when they next meet. My novel, Gold of the Spirits, deals with their initial conflict.

The FBI realizes the Chinese Government has had spies in the United States for years stealing national security secrets. Tom’s investigation reveals that Dr. Wang is leading China’s effort to steal nuclear secrets so that they can develop their first atomic weapon. Every time Tom and his partner, FBI Special Agent Marty Corley, get close to a breakthrough into the workings of the spy ring, they are tipped off about the investigation, the Chinese operatives are hustled out of the United States. Tom speculates the Chinese have someone buried deep inside the United States government tipping them off. This increases the pressure on Tom and his team, as they now must find the source of a leak within the United States law enforcement. Tom builds his own network of sources to attempt to bring down the Chinese spies. First, he re-establishes his connection to MI6 Agent Anthony Middleton in Hong Kong. But when this isn’t enough, he is personally conflicted with a decision to add two young girls, Shou Li Cao and Hada Miyoko. Neither have any professional experience at the spy game but both have necessary connections to work undercover.

Dr. Wang does not sit idly by, as he too adds a to his growing network. They begin stealing secrets from the United States which will grow the fledgling Chinese economy. These acts making their network even harder to break up, as Dr. Wang too uses people with no professional training. As more people on both sides are killed, Dr. Wang becomes even more ruthless all the while gaining more power inside China.

No matter what it takes, Tom is hell-bent on bringing down Dr. Wang. Tom has one last but very risky chance to take him down. But must decide if it is a risk worth taking.

The settings for Chop Stix are San Francisco, Hong Kong, Beijing and Tokyo. It covers the period from late 1963 to 1985. As with all of my novels, it follows a historically accurate timeline, involving real Chinese spies and government officials, as well as a few real high level FBI officials. This is by far and away my most action-packed thriller with an unexpected ending.