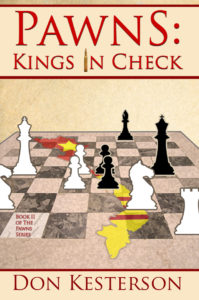 On November 22, 1963, Marine Major Steven Hebert’s life was turned upside down. Manufactured evidence implicates Steven in the plot to assassinate President Kennedy, but he still has his mission: to return to active duty as the head of security at the US Embassy in Saigon at the beginning of 1964. The Embassy is headed by Ambassador Henry Cabot Lodge, who has his own political ambitions, but Hebert is still spying for Edward Lansdale, who remains committed to keeping US ground troops out of South Vietnam and has his own plan for victory. Now, Steven aims to restore his credibility with Lodge and Lansdale.

Steven’s life becomes more complicated when he learns that his younger brother, Jeremiah, has been forced out of college at Southern Mississippi over gambling debt and drugs, and kidnapped by thugs working for a New Orleans Mafia boss. Steven must find a way to serve his country well and faithfully in Vietnam, as well as rescue his brother back in the US.

During the first half of 1964, President Johnson is focused on getting re-elected as the peace candidate, opposed to the hawkish Goldwater. Behind closed doors, Johnson tells the Joint Chiefs to be prepared to ramp up after his election. Meanwhile, the North Vietnamese and the Viet Cong use this time to pour men and supplies into South Vietnam via the Ho Chi Minh trail as they continue to terrorize and intimidate the South Vietnamese population into providing assistance.

Just as Steven regains his credibility with both Lansdale and Lodge, Ambassador Lodge returns to the US. When the North Vietnamese attack two US destroyers in the Gulf of Tonkin, Johnson purposely disseminates misinformation to create a pretext to begin bombing North Vietnam. Johnson plays Lansdale by telling him he will be going back to Vietnam, but instead sends General Maxwell Taylor, the former Chairman of the Joint Chiefs, to be the new ambassador for South Vietnam. This is the final piece in Johnson’s plan to introduce US ground troops.

Purchase Pawns: Kings in Check in print or ebook formats from Amazon.com.