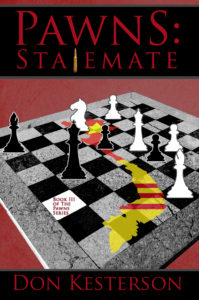 The background story: From President Lyndon B. Johnson introducing ground troops into Vietnam up through the TET Offensive.

This is my third novel in the series about the Vietnam Conflict. It’s the continuation of Steven Hebert service in the United States Marine Corp and newspaper reporter Rita Sullivan’s career growth in the print media, assigned to covering protests.

1965-68. The world has gone crazy. Marine Major Steven Hebert, stationed at the U.S. Embassy in Saigon during the height of the Vietnam Conflict, has a front-row view both of the military strategy and the direct interference from politicians. Yet, because he is African American in a White world, he is given little respect for his experience. Finally, he is recognized for his service and knowledge and is promoted to a new assignment with the Marine Corps as a part of MarCor85, a progressive committee postulating what the battlefield will look like 20 years in the future. While his assignment puts him on the strategy side of the war instead of his desired combat role, he finds himself in the middle of the Tet Offensive, fighting off the crack Viet Cong team attacking the U.S. Embassy—and becomes embroiled in a life and death battle with the Viet Cong lieutenant leading this assault.

In Laos, the “Secret War” continues, the CIA is not only assisting Vang Pao’s army fighting along the Ho Chi Minh trail but also continuing their relationship with the Mafia to produce more and more illegal drugs and shipping them to Saigon, the United States and the rest of the world.

Meanwhile, all the way around the world, in Washington, DC, reporter Rita Sullivan continues to cover the Anti-War protests. However, she secretly continues her investigates into the murders of two individuals with ties to President Kennedy; one who had a relationship with him, while the other was involved with his autopsy. As she delves deeper in these murders the evidence she uncovers places her at odds with those not wanting the truth out, the CIA. The few people willing to talk to her end up missing or dead. After her photographer is kidnapped, she must decide if her desire to resolve these murders are worth the huge risk to her own personal safety.