This week is the fiftieth anniversary of the Tet Offensive, which was the most dynamic military event of the Vietnam Conflict.

Tet is when Asian cultures celebrate the Lunar New Year. In Vietnam, it’s a super holiday, combining the new year with honoring dead ancestors. The government shuts down. During wars, a ceasefire is declared to allow both side to celebrate. However, the National Liberation Front, more commonly referred to as the Viet Cong (VC), rarely honored this ceasefire. In 1968, South Vietnam started Tet on the last day of January. However, U.S. intelligence did not know the North Vietnamese started their tribute two days earlier. Therefore, U.S. military was expecting the VC and the North Vietnamese to attack but several days later.

On the evening of January 31, 1968, a Viet Cong force estimated between 70,000 to as many as 84,000 soldiers, aided by the North Vietnamese Army (NVA), launched a surprise attack on the major cities and towns in South Vietnam. NVA General Giap, the strategic planner for the North Vietnamese, took a huge risk with this all-in attack, hoping this would be their next Dien Bien Phu. Their objectives were to not only win the battles but also break the will of the American public.

When the attacks began in Saigon, specifically at the U.S. Embassy, the U.S. military requested help from the South Vietnamese military, but none came. There was no cavalry “riding over the hill.” The irony in this was that the South Vietnamese government had requested they be put in charge of the security surrounding the U.S. Embassy and the immediate area near the Embassy. The VC had a well-devised plan that included an attack on the Embassy. While they did manage to enter the Embassy grounds and kill five U.S. Marines, the U.S. Military Police (MP) and Marine security guards, with inferior weapons consisting of hand guns and a few rifles, repelled the attack, killing all seventeen VC commandos.

The other significant fighting occurred at Tan Son Nhut Airbase, the American Military Assistance Command, and the South Vietnamese military headquarters. Earlier, Lieutenant General Weyand had placed American and Allied forces strategically to protect the city, as he had a sense a VC attack was coming. The U.S. troops were placed to defend and ultimately counterattack the VC at Tan Son Nhut Arbase. Afterwards, Weyand was given the nickname of “Savior of Saigon.”

When the fighting was over, the U.S. troops had decisively defeated the Viet Cong, with an estimated 37,000 VC killed compared to 2,500 U.S. troops lost. Once the VC were defeated, however, the press chose to focus on the negative aspects of the Tet Offensive. The fighting spirit of the MP and Marine guards at the Embassy was not newsworthy. The fighting spirit to defend and keep open Tan Son Nhut Airbase and the military command was not newsworthy. The difficult fighting the U.S. Marines did at the ancient capital of Hue, where door-to-door, hand-to-hand combat was essential to liberating the city, was not newsworthy.

Instead, the press focused on issues that conveyed to the American public that U.S. troops were defeated. Why? Because the Viet Cong mounted a coordinated country-wide strike, waged attacks all over the city of Saigon, and held the Embassy grounds hostage for hours—which was enough to push flagging American opinion over the edge.

For the last several months leading up to the Tet Offensive, General Westmoreland told the press the VC were close to defeat. If that were true, how could they launch an attack throughout the country—and, more particularly, in Saigon?

Vietnam was the first war to be televised. Battles were literally brought into the living rooms of America. Graphic film footage—in living color—was relayed into every nightly news program. Americans at home got to see how ugly war really is. And the youth of American didn’t like it. And, eventually, the parents of America didn’t like it. Soldiers are conditioned to handle the brutality of war. The American public was not. Especially not when they saw a VC spy killed at point blank range in Saigon. Or a Napalm girl running for her life.

The American public were shown mostly negative film, which, of course, had a profound influence on public opinion. So much so that the men and women who proudly served felt disrespected and humiliated. Many didn’t even want to admit they had served.

This is why I chose to write my series on Vietnam. Someone needs to reveal the whole story—the true story. Why was the United States in Vietnam anyway? What was going on behind the scenes? What really happened where no cameras were allowed? 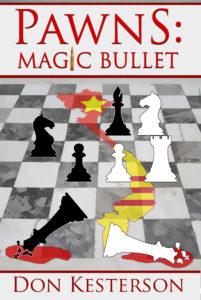