I finally got around to writing and publishing Tarnished Gold, (Amazon paperback, kindle and Barnes and Noble kindle) the sequel, to The President’s Gold, and boy is it good. Just like The President’s Gold and Gold of the Spirits (the prequel), Tarnished Gold is a historically accurate novel which follows the timeline of the Marcos family after they exiled to Hawai’i. 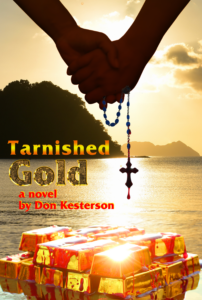 Click here for a more detailed synopsis of the novel. To make the history more readable, I drop several fictional characters into this historically accurate timeline so that the reader is not just reading history but experiencing it, sucked into the middle of the unfolding events. The accuracy and the detail of my historical research has been noticed by various producers regarding Japanese gold buried in the Philippines during World War II and what happened to the gold and treasures, since that time.

For seven years, this story, Tarnished Gold, has been rolling around in the back of my mind, outlined and scenes drafted but I had to do some additional character development so that I could finish it. What’s funny, this character that needed additional development was accomplished in a different novel series of mine, Pawns, but that is how writer’s minds work. So for those of you who read The President’s Gold, maybe even read the prequel, Gold of the Spirits, here is the conclusion to the series regarding gold buried in the Philippines by the Japanese during World War II. More specifically, those who went in to recover the buried gold and treasures, Ferdinand Marcos, the US CIA via Santa Romana, the Japanese Yakuza and the US Military.

And for those of you involved in the interwoven story of The President’s Gold, Frank Young returns as the protagonist, as does Rosalita Laurel, who really isn’t the antagonist, but she isn’t “Snow White” either. There are several real antagonists in the story, but they are the real life people, Ferdinand Marcos, and Fabian Ver, among a few others.

Hope you enjoy reading my new novel, Tarnished Gold, or all the novels in the Gold series. Also, look for me in the History Channels production, Beyond Oak Island series episode.