Last night, the History Channel showed the second episode of “Lost Gold of World War II” and today is the anniversary of the fall of the Philippine Island, the United States territory, to the Japanese. It set up the brutal Bataan Death March but more importantly it set in motion the Japanese plan to bury gold and other treasures in that territory.

General Douglas MacArthur had been recalled to active duty earlier in the year to command the United States Armed Forces in the Asia-Pacific region. He believed he was under explicit orders not to initiate hostilities against the Japanese. Thus, giving the Japanese the upper hand in taking the territory. On February 22, 1942, President Roosevelt ordered MacArthur to move his headquarters to Australia.

As the first troops defending the Philippines began to surrender on the Bataan Peninsula in April, others resisted until May 6. The Japanese army decided to teach the U. S. soldiers and the loyal Filipinos a lesson for their resistance. This decision was made because of the influence of Colonel Tsuji. Most of the 80,000 prisoners of war, including 15,000 Americans, captured by the Japanese at Bataan were forced to undertake the infamous “Death March” to a prison camp 105 kilometers (65 miles) to the north. The Japanese had only made provisions for capturing 25,000 soldiers, they were unprepared for the significantly larger numbers.

The Bataan Death March evolved into a conflict between the Japanese soldiers and officers. Those officers who had served under General Honma were civil to the prisoners of war. Not so for the soldiers who served with Tsuji’s men. They were ruthless, from stealing wedding bands and watches to bayoneting or shooting prisoners. Tsuji even went so far as to threaten his own officers, warning them that he had orders from Tôkyô to treat these prisoners of war this way, and if they did not comply, their careers may be at risk. American and Filipino prisoners of war were bound, beaten, or killed by their Japanese captors. When they fell from exhaustion, some were bayoneted on the spot. Some were forced to dig their own graves and were buried alive. It is estimated as many as 10,000 men, weakened by disease and malnutrition and treated harshly by their captors, died before reaching their destination. Only 54,000 prisoners reached camp alive. Thousands later died from malnutrition and disease.

During the early phases of the Pacific War, most of the Gold, currency and treasures extracted from Southeast Asia by the imperial Golden Lily Group was sent to Japan to the Nagona Bullion bunker to finance the war effort. By mid-1942, when U. S. Navy ships and submarines made the shipping lanes too risky to move Gold and treasures to Japan, another shipping point had to be determined. Chichibu met with Hirohito, and they decided it would be best to ship the Gold to the Philippines. On July 7, 1942, Tojo met with camp commandants from the Philippines and Southeast Asia. He told them short of becoming inhuman; they were not to permit idleness among the prison work detail in the Philippines. This specifically included those digging caves that were ultimately used by the Golden Lily Group to bury Gold. To circumvent Allied air and naval attacks, Prince Chichibu had a fleet of four ships painted as Red Cross ships, which could move without incident throughout the Japanese territories with Gold and treasures.

Hirohito believed even in defeat, he could negotiate a reasonable peace with Roosevelt. His worse case scenario was the United States would let them remove their captured Gold and treasures. The resulting peace would allow Japan to keep Manchuria, Foremosa and the Philippines.

In March 1944, MacArthur’s forces landed in the Philippines to begin their liberation, the Japanese still had a tremendous amount of Gold and treasures to be buried or moved. On March 7, Manila was liberated. Therefore, the Golden Lily team had to take the Gold and treasures with them into the mountains of northern Philippines and other areas during their retreat, where it was buried at many different locations. This required a huge labor operation. 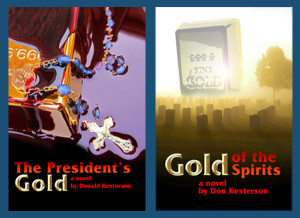 The President’s Gold and Gold of the Spirits, books by Don Kesterson

Prince Chichibu realized they were going to lose.  Unlike Hirohito, he did not believe they could defend the Philippines. Moreover, he did not share the opinion that they could negotiate to keep the Philippines in defeat. Thus, keep the stored Gold. Chichibu ordered the construction of deep underground storage areas, so deep the Gold, currency and other treasures could not be accidentally detected.

Hirohito decided to recall Yamashita Tomoyuki from Manchuria, where he had been sidelined since conquering Singapore. After a week of briefings, he was promoted to full general and sent to the Philippines to oversee the 250,000 men defending that territory. When Yamashita left, he told his chief of staff that it was his turn to die. On October 6, 1944 Yamashita arrived in the Philippines and established his headquarters in Manila. His original army, so successful just thirty months earlier in Malaysia and Singapore, no longer existed as a cohesive unit. Yamashita knew the “beginning of the end” would occur in the Philippines, and it was up to him and his commanders to stop or at least slow down the U.S. troops.

United States Marines continued to advance in the south on Luzon. There were small pockets of resistance, while the Japanese under Yamashita continued to elude the U.S. forces. In April, he moved 50 miles farther inland to the area of Bangbang. As Yamashita continued to retreat over the balance of the Luzon Campaign, he continued to use Guerrilla tactics such as “hit and run” into the Cordillera Mountains. In a rather ironic twist of fate, Gold had been moving to the Philippines for some time before Yamashita’s arrival, yet the Gold found there would ultimately be called Yamashita’s Gold. Yamashita had nothing to do with the Golden Lily Group, although he was aware of their presence. At the last burial site before surrendering his army, he gathered enough gold and silver to pay his own men.

When Hitler surrendered Germany, Hirohito finally realized for the first time his surrender would be unconditional. His only real remaining hope lay it drawing out the war long enough to have the fragile alliance between the United States and the Soviet Union crumble, which might cause either to ask for Japanese help. With the dropping of the two atomic bombs that request never came.